For many years, energy, in the form of heat, has been wasted as natural gas is transported from its source to the ultimate delivery point. Greater than ten thousand “Pressure Reduction Stations” operate in the U.S. natural gas pipeline system to reduce gas pressures to usable levels. In an effort to create a renewable energy source for public utilities, pipeline operators and major industrial users, U.S. investment group Anax Holdings joined forces with Star Refrigeration, a UK-based engineering company, to design and build the Anax Turbo Expander (ASTE250) – a 7’ x 7’ x 29’ skid-mounted 250kW system. The system employs several novel design features to harness this wasted energy in the pressure reduction process and converts it to electric power. It features a packaged, modular, plug-and-play design for grid-parallel and off-grid, zero-emissions power generation.

The machine’s design allows natural gas to enter through an expander section of an axial flow turbine that reduces the gas inlet pressure to a useable pressure downstream. A generator connected to the turbine generates alternating current (AC) at high frequency, which an inverter then converts to 60Hz. This system, which is known as a gas letdown generator (GLG), is so versatile that it can be installed in partnership with conventional pressure regulating devices like city gates and customer pressure-reducing valve stations. It can also be used in natural gas pipeline applications to recover energy lost to large-scale pressure reduction, and then deliver electricity onsite or to the electric grid. 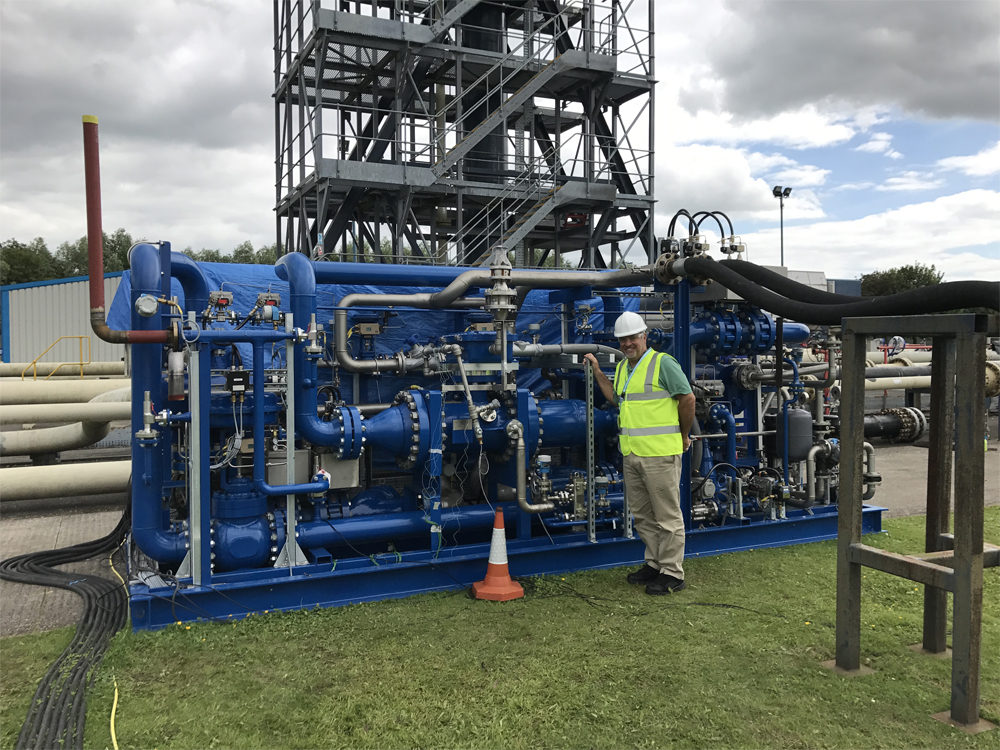 So, how does it work? As natural gas expands, its kinetic energy lessens. This causes the temperature of the gas to drop without emitting any sort of excess heat. The ASTE250 system, therefore, is built to absorb waste heat from other processes and then use that heat to control the temperature of the GLG and condition the exiting gas.

As explained by the Illinois-based Gas Technology Institute in a recent report, the design of the ASTE250 includes staged gas expansion using twin turbines that operate at up to 22,500 RPM. The turbine shaft levitates on specially designed Active Magnetic Bearings and the turbines are shafted to a permanent magnet rotor, which then powers the generator. The system also boasts nearly 100 controlled and fast-stop control sequences in order to maintain safety and integrity.

Although turbo expanders are one of the lesser known components of gas-handling and pressurization systems, the ASTE250 proves that they can also be one of the most important and profitable.